How do you introduce yourself? 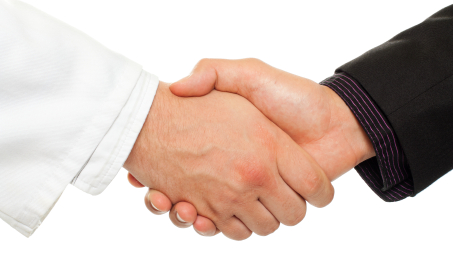 If you are in the go-between stage from employee to entrepreneur, you may find yourself frazzled when asked the question “So, what do you do for a living?” at parties, networking events and neighborhood gatherings.

You have the opportunity to introduce your role in your new venture by responding:

“I am a clothing designer specializing in high-end casual wear for active Boomers.”

“I am an accountant right now, but I kind of hate my job, so I got this clothing design thing going on the side that I will start as soon as I can find some angel investors who want to fund my idea.”

By wobbling around in your introductions, you may have just turned off your first angel investor – the person you just met!

If you are not confident enough to introduce your new work venture, why in the world should anyone else believe in you?

We can learn a lot about the skill of introductions from actors in Los Angeles.  Why does LA have the best-looking waiters, bartenders, bank tellers and administrative assistants?  Because they are all actors moonlighting with other jobs on the side till they get their next acting gig.  It doesn’t matter if their first and only acting job was as an extra in a soda commercial 10 years ago, they will always introduce themselves as an actor.  I LOVE that attitude!  For those passionate about the craft, they are fiercely proud of what they do and feel a higher calling for their work.  (My Aunt Char is like that – she was Miss Beadle from Little House on the Prairie for those old school folks reading … also the Mom in Eraserhead, for the alternative folks! She has done many things in her career: catering, property management and clothing design, but I will always consider her an actor.

The way you will start really owning your new business venture is to introduce yourself as an entrepreneur.  Examples:

New Acquaintance:  “So, what do you do for a living?”

You:  “I help homeowners use solar technology to reduce their energy bills by 400%”

New Acquaintance: “Wow, that is cool!  How long have you been doing it?”

New Acquaintance:  “And this pays your bills?”

You: “It will in the next year as I complete the first phase of start-up.  In the interim, I moonlight as VP of Marketing for IBM.”

The most important outcome of introducing yourself as an entrepreneur first is that you will start to believe it yourself.

There is power in language.  A Buddhist friend once told me that the words that you say form a force field of attraction around you.  So don’t be shy.  Next time someone asks you what you do for a living, don’t chicken out – position yourself as an entrepreneur!

If you want to practice, introduce yourself here.

Filed Under: Becoming an entrepreneur

42 Responses to “How do you introduce yourself?”